5. Test your skill when you draw a kolam by completing the entire design without lifting your hand from the ground. Many Hindu women consider this to be an exercise of focus and concentration, as well as a matter of pride.

6. Try drawing a rangoli, which is a more elaborate form of a kolam that uses different colors and may cover a much larger area.

Tips & Warnings
• Don’t be discouraged by ants or small rodents that start eating the rice flour, therefore ruining the design of the kolam. The purpose of the kolam is to welcome everyone into your home, so simply start anew every morning with a new kolam.
• It is considered bad luck to repeat the exact same kolam pattern within a 30-day period.

3. Pick a pattern for your kolam. You can copy your kolam from an existing template (like the one shown below), or come up with your own design. Generally, kolams consist of lines running around patterns of dots in a geometric pattern. Many kolams depict lotus flowers, which are particularly appropriate for welcoming Lakshmi Mata into your home. Symmetry is desirable, but not necessary.

4. Make sure that all of the lines are complete, enclosing the entire design. The idea is that if evil spirits are unable to enter the shapes of the kolam, then they will be unable to enter your home

These are the steps to making a great kolam that will surely impress all visitors and passer-bys!

1. Choose an area to draw the kolam, such as a threshold, porch or anywhere else a visitor might see it before reaching your front door. Sweep the area clean, and then wet it down with water. The rice powder will stick better to a damp surface.

2. Cover the area with limestone or red brick powder in order to provide a contrast to the white rice flour. Cow dung may also be used, since it can also act as an antiseptic and therefore “protect” your home. 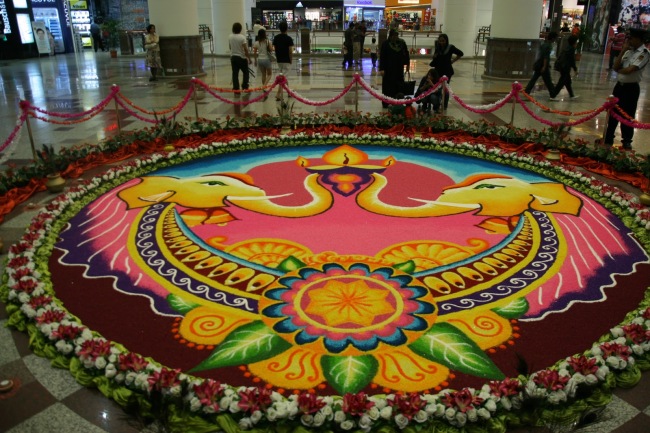 Though the intricate design of the Kolam may seem rather daunting, the preparation of the necessary material required is quite easy.

First you may need to grind rice using a grinder or using a pestle and mortar. Then soak the grinded rice in dye of preferred colour. Once soaked for a minimum of 2 hours. Once soaked let them dry .

There is various type of kolam.Some of the type of kolam is Manai kolam (Wedding Kolams),Vaara kolam (Weekly Kolams),Pulli Kolam,Neli Kolam and Rangoli.

This means the kolams drawn at the time of weddings and other good events in the homes, Temples, etc.These mani kolams are drawn with the help of the raw rice powder, Manjal (Turmeric), and Semman (Kavi). As per the hindu dharmam When we are putting Kolam with the raw rice powder many ants and other birds come to taken them as food. When these insecticides and birds have food the bless the persons in that house or manai. This is considered as an act of dhanam/dharman as per the hindu sasthram.

Pulli (dots) are arranged in a specific sequence and order & these pullis are joined to make pictorial designs. In pulli kolams, there is an another type – forming of twisted chains by linking one loop with the next & forming wonderful designs with the basic pattern. This is called Chuzhi kolam. That is explained laterin a separate link.
Plates, Boxes are available with tzhe designs etched as tiny holes.
When these are filled with kolam powder & tapped on the ground, you have a lovely kolam. Rollers are also availabe. The rollers are filled with kolam powder & rolled/dragged to create lines, and with a little imagination a kolam of your choice can be executed.
These are kolams which are drawn daily by the common women allover india. These kolams are drawn by keeping dots. by connecting the dots they create birds, animals, various designs, butterflies, deer etc.,These kolams look beautiful and are drawn according to ones creativity and dreams.

This kolam is also called as “Kambi Kolam” or “Chikku kolam” or “Pinnal Kolam”. As the name indicates a line moves around the dots to form a design. This type of kolams are very mesmerising when people see it as they could not find the starting and the end point of the kolam. And so they are called as chikku kolam.

The origin of rangoli painting is traced to a legend recorded in the Chitralakshana, the earliest Nepalese treatise on painting.
When the son of a King’s high priest died, Brahma, Lord of the universe, asked the king to paint the likeness of the boy so that Brahma could breathe life into him again.This is how, it is believed, the first painting was made.Also, the son of the king painted a portrait of a girl whom the son liked very much, although the king would not let his son see her.Rangoli also became a form of self-portraiture for women.And nowadays rangoli have become a ver passonate art for womens and even the mens.In college culturals this art of rangoli have taken its warmth position as no.1 event where ever we see.

Where and when did Kolam come from? This ancient form of art is believed to date back to the ancient Pre-Aryan civilization to the Indus Valley civilization around 2500 B.C. These motifs, were made out of edible grains and rice powder in ancient times and were believed to be used to feed insects and small animals as a way to invite or welcome these critters into their homes to promote co-existence with all beings. Another belief is that the Kolam is drawn to invite Lakshmi, the Hindu Goddess of Prosperity, into their homes. There are many more beliefs behind the of purpose Kolam and many of those are still held on to untill today.

What is kolam? Kolam is a form of painting made using finely ground white powder and colours, and is a geometrical line drawing composed of curved loops, drawn around a grid pattern of dots.  It is used commonly outside homes in India or during Indian festivities  in Malaysia.   In Northern India it is known as rangoli. The term rangoli is derived from words rang (colour) and aavalli (‘coloured creepers’ or ‘row of colours’). More complex kolams are drawn and colors are often added during holiday occasions and special events.

The greatest WordPress.com site in all the land!